Written by Christeen Khshiboun
Updated over a week ago

Why do the numerics I see in the reports sometimes differ from the comparable numerics on the dashboard and other pages?

The Vulcan Analytics reports perform a data sync once a day. The analytics mechanism captures and processes data every day around 04:00 AM UTC time and updates the reports and widgets accordingly.

This means that the data displayed in the Vulcan Analytics Reports accurately reflects the data captured at the time the daily sync process was complete (i.e., around 4 AM UTC). Data changes, updates, or settings modifications that occur after the daily is complete are reflected in the reports only after the next data sync (i.e., the next day around 4 AM UTC). If you happen to see some data misalignments when comparing the data in the report to other comparable data sets in the Vulcan Platform, keep in mind that this is expected behavior.

Here are some examples of changes and updates that might occur after the sync time and will not be observed in Analytics until the next sync time:

Nevertheless, the misalignments are usually minor and barely noticeable, with little to no impact on the report's statistical value, validity, and insight.

There is an exception!

The Users and Roles setting is the only element in the Vulcan Platform that syncs in real-time with the Vulcan Analytics Reports. Changes performed on Users and Roles are reflected immediately in the relevant reports and widgets.

Is the Analytics sync time the same as the connectors' and data mergers'?

Usually no. Analytics sync time is fixed and runs daily around 4 AM UTC. When setting up the Vulcan Platform, connectors and data mergers' daily sync times are set according to the organization's needs.

How do the different sync times affect the data presented in the reports?

The difference in sync times between Analytics, Connectors, and data mergers doesn't affect your data as much as it may naturally yield some minor observed misalignments across the platform's comparable data representations.
See An exercise in data validation and what to expect due to Analytics sync time

Is the data in the reports retroactively affected If I change a system setting?

No. Any change performed on the Vulcan Platform settings is reflected only in the data processed on the next sync time. Vulcan Analytics doesn't update historical data.

What do the numbers in the filter drop-down mean?

The numbers you see next to the filter choice selection represent a record in the database table. These numbers have no meaning or impact whatsoever on the data presented beyond the cosmetic addition to the filters drop-down menu.

When and how is data validation affected by Analytics sync time?

Example Goal:
Check and validate the % of Risk Mass in Exception Requests out of the total organization Risk Mass.

Process:
First, let's check the dashboard for the organizational Risk Mass. In this example, it shows 141 m (million). 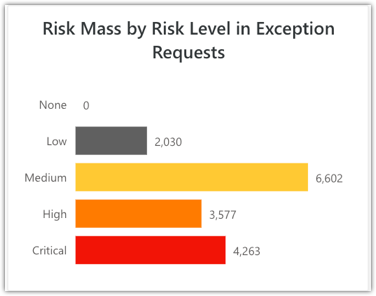 So far so good since the numbers add up.

Now let's consider the following scenario of a potential observation of data misalignment:

The next day a connector sync is complete, and more assets are added to the Vulcan platform with 2 million more risk mass added to the total organizational risk mass. At the same time, you opened 200 more Exception Requests.

If you attempt to re-validate the Risk Mass volume and % in Exception Requests out of the new total Risk Mass before the Analytics syncs again, the numbers wouldn't add up accurately. In this case, you should expect to observe the same exact stats in Analytics despite the increase in the organizational overall Risk Mass and the addition of 200 more Exception Requests. Once the Analytics completes daily sync, the widgets get updated, and the numbers align.